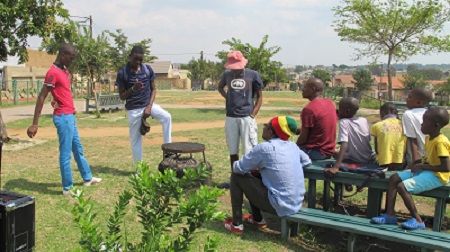 Ntsoana presented “The Promised City” as part of the VANSA project, Revolution Room click here The conclusion and presentation of the project took place in Cosmo City on the 29th of August 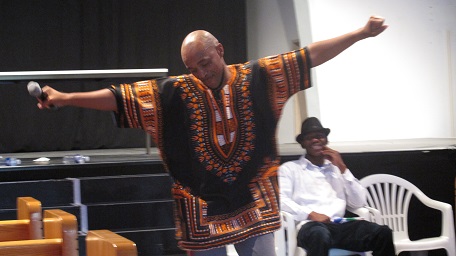 Ntsoana performed Afrika at the 18th Internationale Schillertage Festival in Mannheim on the 16th and 17th of June 2015
at the Benjamin Franklin Village. For more information on the Festival click here 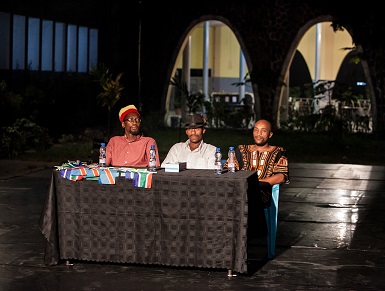 During July Ntsoana travelled to the DRC to perform AfriKa at the 6th edition of the Connexion Kin Festival in Kinshasa.click here 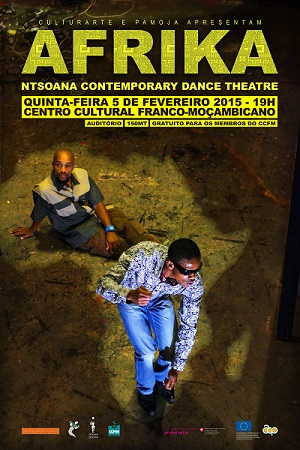 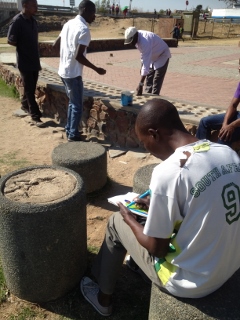 Freddie Opoku-Addaie with Sello Pesa and Ntsoana Contemporary Theatre’s Humphrey Maleka and Brain Mtembu at Alexandra Township. This image was taken during observation/Dialogue with locals playing Moruba, a traditional South African game that used the fruit of the Amarula tree as a counter. A variation of the game ‘Oware’ is commonly known which Freddie played when he was in Ghana during his formative years. Also know in English as “Awari’. One fascinating aspect of this version of Moruba is that the pits are engraved into the concrete and on the ground.

At the invitation of the Goethe Institut, Sello Pesa went to Abidjan, Cote D’Ivoire. While there, he conducted site specific workshops for choreographers as part of the Festival

Ntsoana travelled to Strasbourg to participate in Play>Urban, an exchange project between Wits University and the Haute école des arts du Rhin which began in 2012 and aims to mobilize the concept of play as constitutive of a set of processes or a range of methods for interaction with the urban.

While there, Ntsoana presented Lime Light on Rites at Pôle Sud and were will be one of the 5 Artists whose work was discussed as part of the two theoretical days focusing on performances staged in urban spaces. 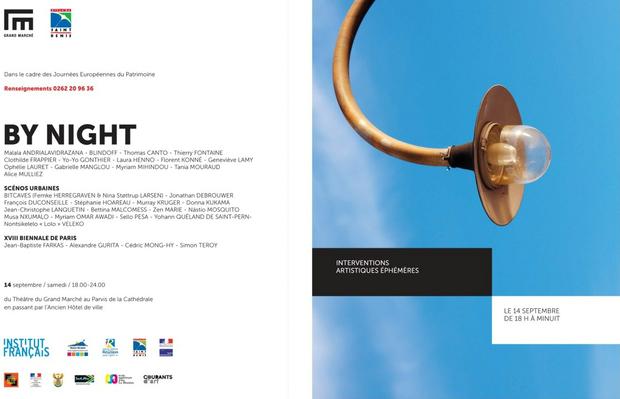 During August, Ntsoana assissted the Goethe Institute in the realisation of ASINGLELINE which was created but the eclectic group, Mamaza for performance on the 31st of August

Sello Pesa participated as a guest speaker at Ar(t)chive Colloquium 2013 which looks at the lif and works of Robyn Orlin.

Sello Pesa and Humphrey Maleka participated in the Connexion Kin - Shared Spaces Festival which took place in Kinshasa in June 2013. As part of the International Academy, Humphrey then went onto festival Theaterformen of Hannover.

In the loading dock backstage at the Wits Theatre

Displacement Powerlines consist of 2 solos performed at the same time building a link between 2 seemingly unrelated topics.It explores how technology has encroached on society and led to the alteration of traditional games and social interaction. It explores the emergence of new social rituals such as Shoefiti and examines the thin line between the perceived reality and the need for social contact and acceptance.

Directed by Sello Pesa,conceptualised and created by Humphrey Maleka and Brian Mtembu, Displacement Powerlines was made possible by funding received from the National Lottery Distribution Trust Fund who funded the training of the choreographers as well as the research and development of the works

The collaboration between Ntsoana and Vaughn Sadie has been nominated for an MTN New Contemporaries Award 2012.

The works that have been developed for the competition respond to the Castle as a site in transition and crisis. As with many heritage sites nationally, the Castle battles to locate itself outside of its own historical legacy. In attempts to reposition itself within a contemporary reality and much like similar sites, it may be perceived as unable to make itself vital or relevant to the immediate inhabitants that perform the complex relationship between the continually shifting public spaces that encroach on dominant historical legacy of the Castle that defines the area.

Ntsoana presented the 4th Edition of the In House Project, made possible by funding from the National Lotteries Commission, in December 2016. 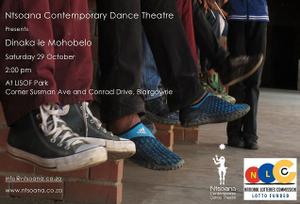 On the 29 October Ntsoana presented an exciting new work with traditional dance groups Boemo Babo Ntate Bothata, who have featured in several of Ntsoana’s projects, and Real Madird from Olievenhoud. The groups have working together to create an interesting mix of traditional Sotho and Pedi dance with in a modern framework.

During April Ntsoana conducted workshops with 2 groups of talented artists. The workshops, held at the Workers Museum in Newtown and Altrek Centre in Alexandra, focused on the theory and practice behind Site specific creations and culminated with a presentation on the 1st of May in Alex.

The Centre for the Less Good Idea

Ntsoana presented No Man’s Land on the 5th of March as part of the Centre for the Less Good Idea’s Season 1 which took place in Maboneng from the 1st - 5th March 2017. 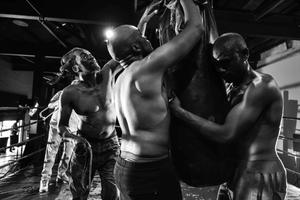 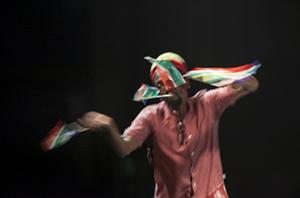 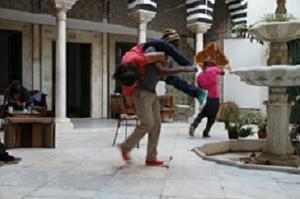 Ntsoana was excited to be in Tunisia for the Dream City Festival, a Multidisciplinary Biennale of Contemporary Art in Public Space, which took place in the Medina from the 4th - 8th of November 2015. Selected Artists from the MENA region, Africa and Europe were brought together by directors Selma & Sofiane Ouissi, under the curatorship of Jan Goossens to explore a general theme “Art and Social Bonds”. For more information on the project click here
Thanks to 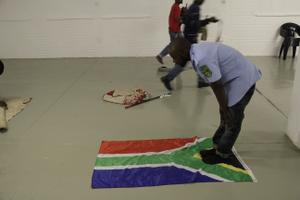 During September Ntsoana conducted workshops at The Dance Studio and VANSA. The workshops, centred around the themes explored in the work AfriKa, were the culmination of a year long project which began with the residency in Maputo. The workshops were made possible by funding from the National Arts Council of South Africa. The final presentation took place at VANSA on Sunday 27 September 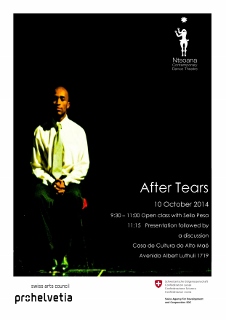 From the 1st - 10th of October Artistic Director/ Choreographer, Sello Pesa and performer, Humphrey Maleka were in residencey at Casa da Cultura do Alto Maé in Maputo researching spaces and urban areas as well as local rituals in preparation for presentation of the internationally acclaimed work After Tears.

While there, Sello Pesa conducted a Masterclass, which was followed by a presentation of After Tears and then a discussion about the work.

Thanks to Cultur Arte for hosting the company, The project was supported by Pro Helvetia through the Swiss Agency for Development and Cooperation fund.