Sello Pesa is a Soweto born choreographer and dancer interested in the changes and challenges that arise from living in South Africa and is greatly respected locally and overseas. He has been inspired by diverse South African choreographers and spent four years touring South Africa and Europe with the late Jackie Mbuyisela Semela’s Soweto Dance Theatre.

After receiving a 2 year scholarship to study at the Northern Contemporary Dance School in Leeds he was commissioned by Yorkshire Dance to create Scars which was performed at the Riley Theatre, Chapeltown, and then by the American Dance Festival to create Scars II. Sello co-founded Inzalo Dance Theatre with Moeketsi Koena in 1999 and was co-Artistic director until the beginning of 2002.

In 2001 Sello’s work Same But Different won first prize at the Sanga II African Contemporary biennial in Madagascar –the work was toured to Europe and Africa. As winner of Sanga II, Same But Different was invited to participate in Movement ®evolution In and Out of Africa in the United States, 2004.

Sello spent four years collaborating with French choreographer, Valerie Berger, and has performed extensively overseas in countries such as Mauritius, Seychelles, Madagascar, Reunion Island, India, Europe, Russia, America and Africa and is and a great exponent of African Dance. Locally, Sello is greatly respected and is regularly commissioned to create works for festivals such as the Arts Alive Festival and the Dance Umbrella.

In 2006 Sello formally registered Ntsoana Contemporary Dance Theatre as a Non – Profit Organisation and was invited to the Small World Festival in Russia where he conducted master classes, choreographed and performed.

As Artistic Director of Ntsoana, Sello was instrumental in starting the Training and Development Programme which aims to train and develop young dance practitioners into well rounded artists. He has conducted choreographic workshops on behalf of the Dance Umbrella and the Gauteng Department of Sports, Recreation, Arts and Culture.

During 2008, 2009 and 2010 Sello and Belgium based Carlos Pez collaborated on the SharpSharp Activities which included Cross Currents and was developed in South Africa and Germany - in 2010 wit as extended to the Townships in Cape Town and Johannesburg.

In 2009 and again in 2011 he was invited to teach contemporary and African dance master classes at the Tanzfabrik – Berlin and in 2011 Sello was the South African representative at the Choreographic laboratory held as part of the Attakkalari Biennial in India.

Sello’s aspiration to make dance and arts accessible to a wide and diverse audience was realised in 2010 with the In House Project which placed performances in houses and public spaces in Jo’burg and its surrounding Townships. The project was then invited to be performed as part of the Colloquium, Emerging Modernities, which was held at the University of Cape Town in 2011.

Sello enjoys exploring new ways of working and pushing his boundaries; this has led to collaborations with Peter van Heerden in the creation of the controversial Time of the Small Berries in 2010 and the award winning Inhabitant, Tshwene ga ipone makopo, Amagwinya and Teka Munyika with Vaughn SAdie in 2011.

Along with 2 Ethiopian choreographers, Sello was involved with the creation of a site specific work for the Goethe Institute Addis Abeba’s 50th Anniversary in 2012.

In 2017 Sello returned to England for the first time in 20 years to perform his solo, After Tears, at London Dance Umbrella and participate in a conference.

Sello’s fascination with Site Specific work and the creation of Living Installations is fuelled by a keen eye and analysis of ordinary situations; he was part of the Scenós Urbaines project, By Night, in Reunion Island and was one of 5 featured artists involved in Play> Urban Exchange project which took place in Strasbourg, 2013. 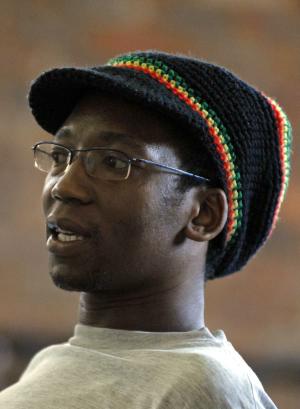